Many audio engineers get into this industry from the music and performance side of things. While many of the concepts and approaches one would apply to a live music production apply equally well to corporate/conference/political gigs, some techniques and practices need to be modified or refined to better suit the corporate/conference/political environment. This blog series is written as a brief introduction to the world of large-scale corporate audio.  We will compare and contrast common practices between the music/performance and corporate/conference sides of the live event industry. It is assumed that the reader has a basic understanding of audio, audio processing, and live sound reinforcement.  A quality digital console with loads of grouping, routing, and output options, as well as fully adjustable output EQ’s and delays, has become almost indispensable for this type of work.  It is assumed that such a console is being used.

Not every conference gig will require every single approach listed in this series, but the points described here are used frequently. It should be noted that my opinion is not the definitive word in the events industry, and any two engineers might have four different perfectly valid approaches towards the same situation.  These practices and observations have taken shape over the course of hundreds of large-scale corporate events and have served me well. Remember that everything taking place here does not happen in isolation – all this must be done in a few hours while other vendors set up: lights are hung and focused, projectors and screens are installed, the stage is built, while the client keeps making additions to the script. Working quickly and efficiently while presenting a good face to the client and staying friendly and cooperative with other vendors is the only way these gigs happen and you get paid and hired again. This means knowing your equipment thoroughly and quickly navigating menus and pages to adjust the appropriate parameters. It means hearing and identifying problem frequencies before they feed back, and hearing the difference between a sound arriving a few milliseconds early, on time, and late. It also means that when things go wrong – and they absolutely will – calmly troubleshooting to solve the problem, or else quickly devising a workaround solution.

The first major difference between concert and conference is the way an engineer thinks about the relationship between the mains, fills, and delays. In a typical music concert production, the mains are exactly what the name implies– the main speakers which supply the bulk of the sound in the room/space. These are supplemented by delays if the room/space is large enough and front fills if there is a significant hole in the coverage for the first few rows. Larger gigs and/or oddly shaped rooms might have any number of other fill speakers such as out fills, back fills, etc., but the point of all of these fill and delay speakers is to supplement the output of the mains. 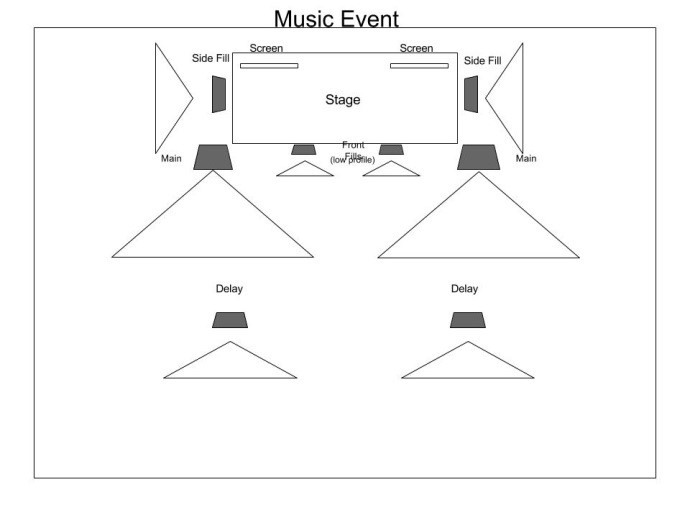 (Fig. 1 depicts a typical PA design for a musical concert. The mains are just offstage, downstage of the performance. To fill in the gap in coverage between the mains, small front fill speakers are used either on the lip of the stage or just in front of it. Small delay speakers are out towards the back rows, time-aligned with the mains to reinforce coverage. Side fill or out fill speakers cover the sides of the stage not covered by the mains. There are large screens on stage, but the content on the screens is not crucial, so it’s OK that the view is partially blocked for many in the audience.)

For conference gigs, however, this relationship is skewed. To begin with, concerts are expected to be loud, and a big honkin’ PA filling the entire space is generally considered an enjoyable experience for the audience. Conference gigs are not supposed to be loud.  They mostly consist of people talking, and the audience wants to hear and understand them, not be awed by the power of their boss’s voice. To rely on your mains for the bulk of the sound in a conference gig would require the mains to be really loud, which could be distracting, unpleasant, or even painful for the audience. So for conference gigs it’s helpful to think more in terms of zones.  You will still have your mains, but you won’t be trying to push air all the way to the back of the room, relying instead on more delays and fill speakers to provide even coverage at moderate listening levels.  Another reason that corporate gigs rely more on zones than on the mains is the primacy of sight lines over audio in the corporate world, which can sometimes require us to place our speakers in less than ideal spots. With a concert the main purpose of screens flanking the stage is to show close-shots of the performance in real-time (sometimes called IMAG, or image magnification) and in such situations it’s OK if some of the audience doesn’t have a perfect view of the lead player’s guitar face. Conversely, with corporate and conference events the screens exist for presentations, Powerpoints, and informative slides – If an audience member can’t see the screen, that audience member might miss the entire point of the presentation. As such, our mains are often pushed way off to the side of these screens, leaving a giant gap in the front that must be addressed by front fill speakers. This also requires our mains to be toed-in to cover much of the seating area, so our delays must cover the outsides of the seating area more towards our FOH position.  Often this can place a large number of seats in the Delay Speakers’ outside coverage area, necessitating even more delay speakers to cover those seats. Astute observers among you might immediately think “…but all of those speakers separated by so much space, focused on the same area?! Won’t there be massive phase cancellation and comb filtering?” The process of time-aligning all of these speaker sets to counteract this comb filtering, along with other best practices for system tuning, will be discussed in the next blog. 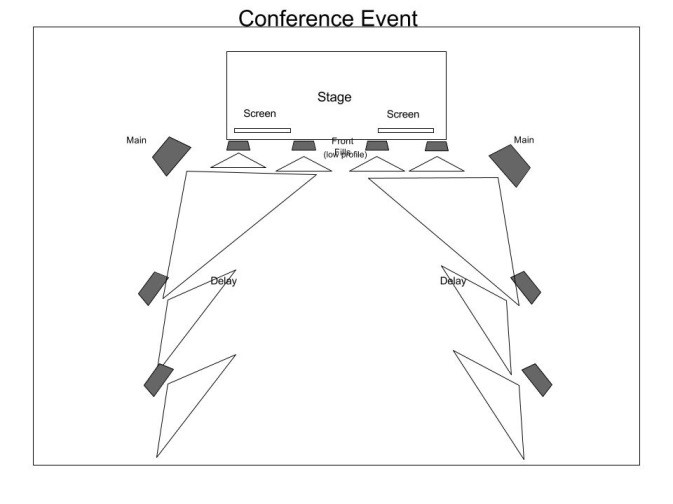 (Fig. 2 depicts the same space as fig. 1, but this time set up for a conference gig. Because the screens onstage portray vital content, sight lines cannot be blocked anywhere in the house. The mains are pushed off to the side, requiring more front fills to cover the larger gap between the mains. The edges of the mains’ coverage area, where both volume and frequency response start to deteriorate, are now responsible for covering a larger number of seats than in the music concert. The delays are now closer to the front to fill in this weak coverage zone. Now the edges of the first set of delays’ coverage zones are also covering a larger number of seats, so a second set of delays is brought in to compensate. )

You can read about other audio-related jobs here.

One thought on “What is Corporate Audio?”