At the Omega Studios’ School, we teach principles of sound synthesis in our Electronic Music, Synthesizers, and MIDI Program, and many of the theories mentioned in this article are part of the discussion of fundamentals of sound that is presented at the beginning of all of our programs. Understanding these recording studio technologies is integral in sound synthesis and sound design training.  Subtractive Synthesis gained much popularity in the 1960s and 1970s and was one of the first forms of synthesis available to the masses.  A basic subtractive synth requires only a handful of components yet can yield a wide range of sounds, making it perfect for the early synth designers who wanted to make synthesizers more affordable and accessible.  One of the first commercially successful subtractive synths was the Minimoog created by Robert Moog in 1969.

Additive Synthesis goes as far back as the early 1900s with the creation of tonewheel based instruments such as the Telharmonium and later the Hammond Organ.  The concepts of additive synthesis however, can be traced back even further to Joseph Fourier’s research on harmonic analysis and his subsequent publication in 1822 of what we now call Fourier’s Theorem.

Additive synthesizers have oscillators too, but traditionally only offer one waveshape for those oscillators; the sine wave.  Here the idea is to build the desired sound one harmonic at a time.  Each sine wave oscillator is tuned to a specific frequency to correspond with a specific harmonic.  This is more like building something with Legos, one block at a time.  The more blocks you have the more realistic you can make your sculpture.  Just like the more oscillators you have in an additive synthesizer the more detailed you can make your sound.  Thus additive synths often have more oscillators than subtractive synths and do not require a filter. 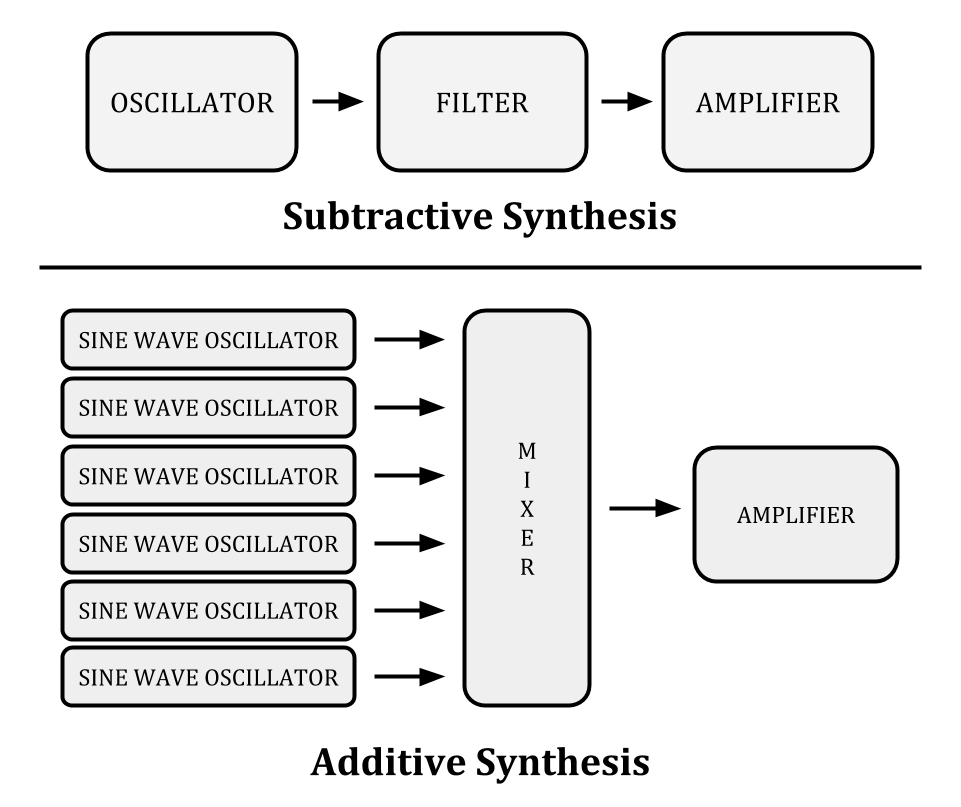