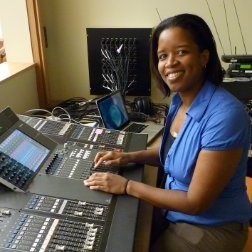 Lauren Truitt has always wanted to use her skills to help others. Since 2014, Lauren has been using her education she received at The Omega Studios’ School to help other students learn about the magic of audio. Lauren works for Howard County Library Systems as the STEM High Tech Instructor, where she introduces students to camera, film, and audio editing techniques. Much like her 15 week curriculum, Lauren utilizes her intelligence and technical skill to bring students into proximity of high-tech gear.

All throughout high school, Lauren enjoyed the learning process. After she graduated, she wanted to continue her education and develop her career in Audio Engineering. In 2006, she attended The Omega Studios’ School and graduated from the Recording Engineering and Studio Techniques program. Shortly after, she was awarded an internship where she continued to work on a variety of projects, including editing on ADR (Audio Dialogue Replacement) sessions. Lauren quite enjoyed working with the film aspect, specifically, and soon she became a freelance Audio Engineer specializing in audio for film editing.

In 2011, she was able to combine her passion and education to work on audio for an educational DVD called “Aiden’s Alphabet” for Evelyn English. She used her education and training she received at Omega Studios’ School to use the programs ProTools and Final Cut on “Aiden’s Alphabet”. After having success with that project, Lauren went on to be a Live Sound Engineer for St. John’s Baptist Church for seven years. There, she used Mackie and Yamaha live sound consoles to manage the church sessions, as well as managed all of the church’s audio equipment. She enjoyed her time at St. John’s, but she always wanted to get back into teaching. Soon, she would have her opportunity.

In 2014, she became the STEM High Tech Instructor for Howard County Library Systems. She continues to do what she loves, and uses her education she received from Omega Studios’ School to further the schooling of others.