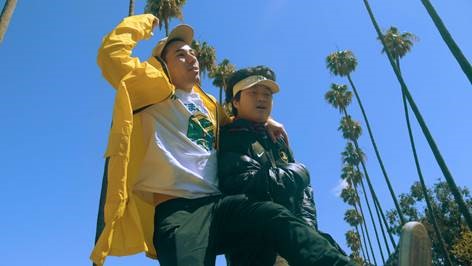 Jack Dosik is an Audio Engineer / Producer working for Temple Base Studios in Hollywood, California. He is also an Artist, and half of the Hip Hop group “sensugang” from Los Angeles, California. Jack is a 2017 Graduate of The Omega Studios’ School of Applied Recording Arts & Sciences. Jack’s journey to becoming a professional in the Music Industry has taken him across the country, from our School in Rockville, MD to the West Coast.

I wanted to talk to him about how his passion for music and the training he received at Omega allowed him to follow his dream job of working in the Music Industry. I was able to interview him and ask about his training, and then working, as an Audio Engineer.

A: Before Omega I was producing music and recording people all the time in my basement for about 4 years. I linked up with a local rap group called 2hectic and got thrown into the hip hop world as a Producer/Engineer. They had a few popular songs and a buzz going so I got a feel for what the industry was like during that time. After that fizzled out I attended a university for their Audio Engineering program, but it was an awful experience so I left after my first semester and enrolled in Omega. I became interested in music from playing guitar at a young age, and I had a friend who played piano so we’d often make songs for fun.

Q: How did you become introduced to Omega?

A: A friend of my parents who was in a band recommended Omega studio school to me. I liked how it was only a year long program and wasn’t bloated with classes a normal university would have for a degree.

Q: What did you study at Omega?

A: I did the Audio Engineering for the Music Industry Program.

A: Immediately after graduating Omega I spent two months recording and producing for a lot of people just trying to get to a comfortable skill level and financial standing in order to move to LA. Last March I moved out with my friend and music duo member Augustine Yu. From there I just began the grind searching for an internship. Apart from lots of music being made, for a while nothing much was happening. I started doing volunteer sessions at a youth center and that eventually led me to meeting Guy Baruch, owner of Temple Base Studios in the media district of Hollywood. For the next five months I was an intern at Temple Base doing runs, lighting candles… cleaning… fun intern stuff. After five months of being there I was offered a position of Part Time Manager/ Engineer.

A: Since getting the job at Temple Base I’ve recorded a lot of music and pretty much made the switch from being mainly a Producer/Engineer to an Artist. I’m on call at the studio whenever they need me but most of my time is now devoted to my project called “sensugang“. “sensugang” is a duo made up of myself and rapper Gangaroo Pouch. Everything is self produced and recorded by us. I make the beats and do the hooks, he does the verses. We dropped our first single “Rainbows” last month on all platforms, here’s the Soundcloud link: https://soundcloud.com/sensugang/rainbows

We at Omega Studios would like to thank Jack Dosik for taking the time to be interviewed. We wish him the best of luck as he pursues his passion for music in Hollywood, CA. If you would like to find out more information, please follow the links below.

Read more about our Programs.

Read more about our Graduates.