In the last blog you learned about some aspects of a microphone’s sound to help you decide on which mic to use. Next, we’ll discuss some practical factors that also play a role when choosing a mic.

The amount of sound pressure a microphone can withstand is important when recording loud sources like guitar amps, kick drums, brass instruments, and loud singers. If you try to record a source that’s too loud, you might distort the microphone. Engaging a pad on your preamp or console channel strip will not fix this problem, because the distortion happens in the microphone itself. Related to SPL handling is saturation. Sometimes with sounds that are just a little bit too loud, certain microphones will not quite distort but will exhibit a saturated, retro kind of sound. Usually this rounds off some of the transients providing a thick, almost compressed character. Sometimes this is a desirable effect, sometimes not so much.

Another thing to consider is the microphone’s output level, and how that interacts with whichever preamp you are using. Some mics are just quieter than others, which may require you to crank the preamp gain a little more than usual. This can be a problem if you have a noisy preamp. Conversely, some microphones are louder than normal. If your preamp does not have a lot of headroom, or does not have a switchable pad, you might drive the preamp into distortion. Related to a microphone’s output level is its self-noise. Some mics are inherently noisy, and if you have to use a lot of gain on the preamp you’ll be amplifying that noise as well. Sometime’s output level is affected by the interaction between the output impedance of the microphone and the input impedance of the preamp. If your preamp has a switchable or sweepable impedance control, this might affect the output level of the microphone. This can also have a subtle effect on the frequency response, transient response, and saturation of a microphone (usually this only affects dynamic or ribbon microphones, while condensers tend to be immune to changes in impedance.)

Another practical factor is a microphone’s durability. This is not a measurable, quantifiable characteristic that can be printed on a chart, it’s just a subjective judgement of how fragile or resilient a microphone is. You don’t want to place delicate microphones in places where they could fall or be struck and get damaged as a result. This is not just a matter of physical blows. Some ribbon mics are particularly susceptible to damage from plosives and loud low-frequency sounds. Some condenser microphones can short out from the humidity in a singer’s breath on a hot day.

Just as important, especially when close-mic’ing in crowded spaces, are the physical dimensions of the mic itself. Can you fit the microphone into the space it needs to be in? And if it is a directional microphone, is its on-axis point at the end of the microphone body or its side? Does that affect the ways that mic could be placed? There are plenty of times when I’ve wanted to use a particular microphone on a source because of all of the sonic characteristics described previously, but I had to use a different one because the preferred choice was just too bulky or cumbersome and would have inhibited the artist’s performance. Take for example the task of mic’ing up a busy drum kit, with lots of cymbals. 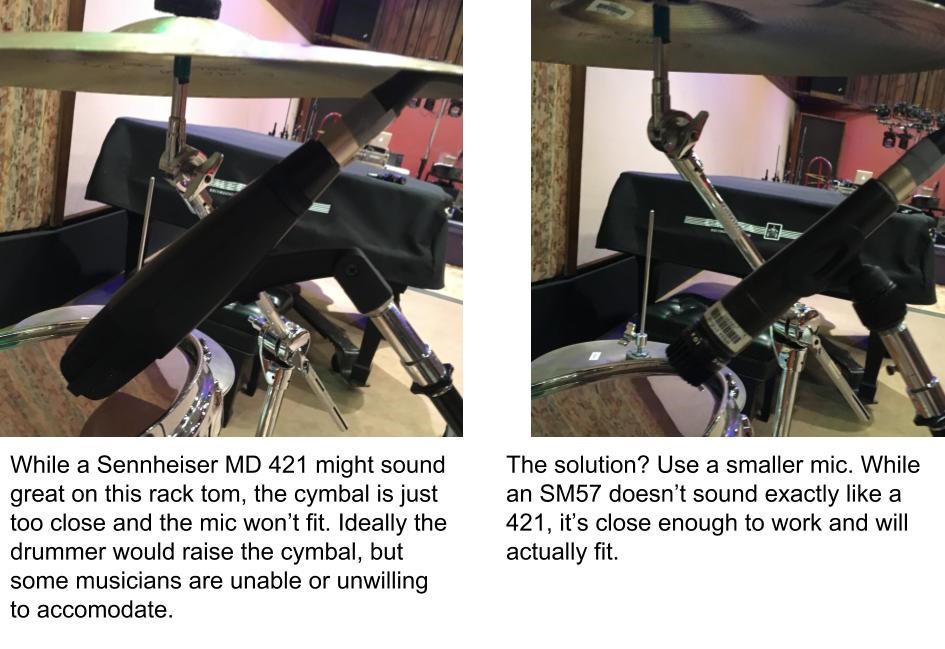 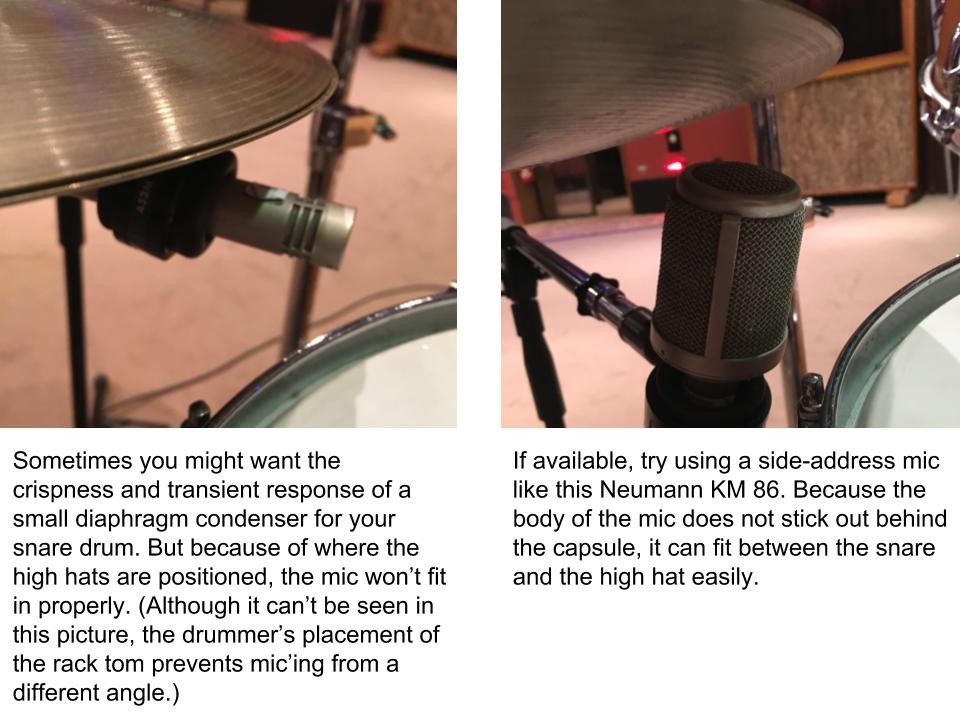 So between these two blog posts, you’ve learned to consider a microphone’s:

Some microphones have a thin diaphragm flecked  or “sputtered” with bits of metal that, along with an electrically charged metal plate, forms a type of electrical component called a capacitor inside the microphone. As the sound pressure vibrates the thin diaphragm, it moves back and forth relative to the metal plate. That movement changes the capacitance of this makeshift capacitor, and the changes in capacitance mirror the changes in sound pressure level. 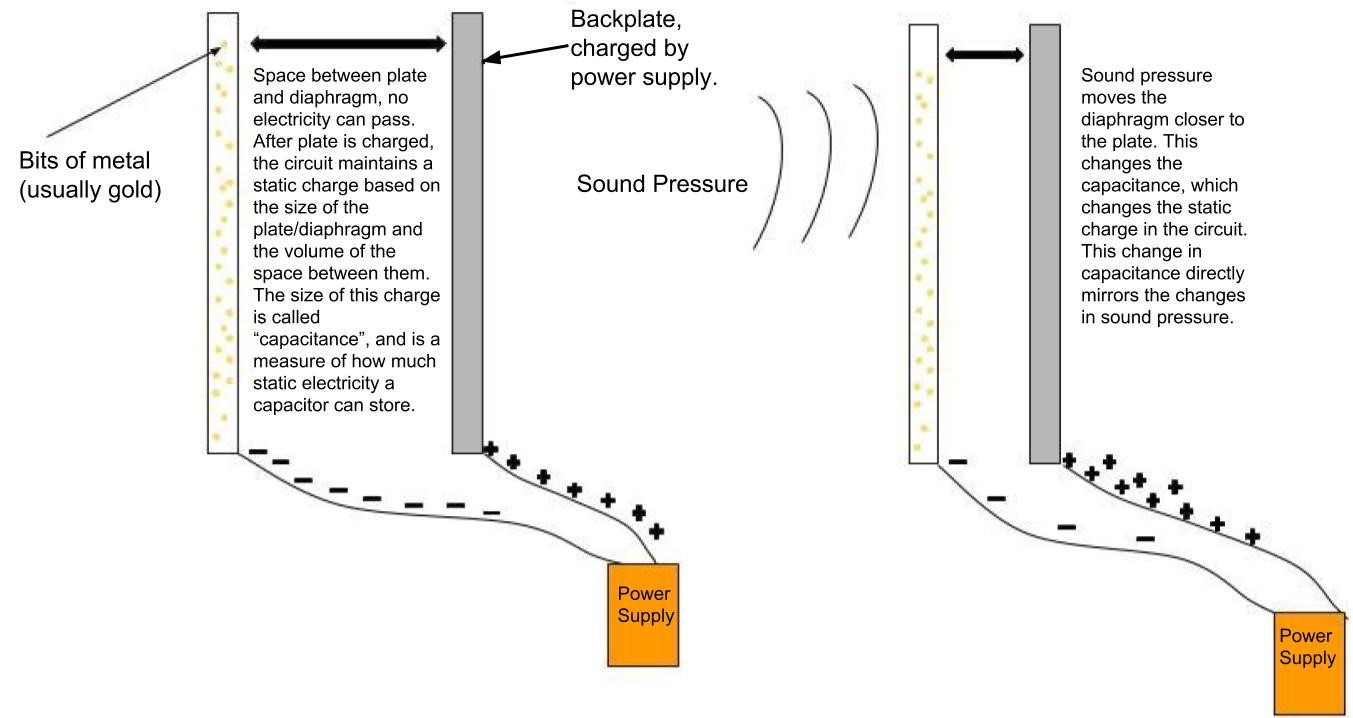 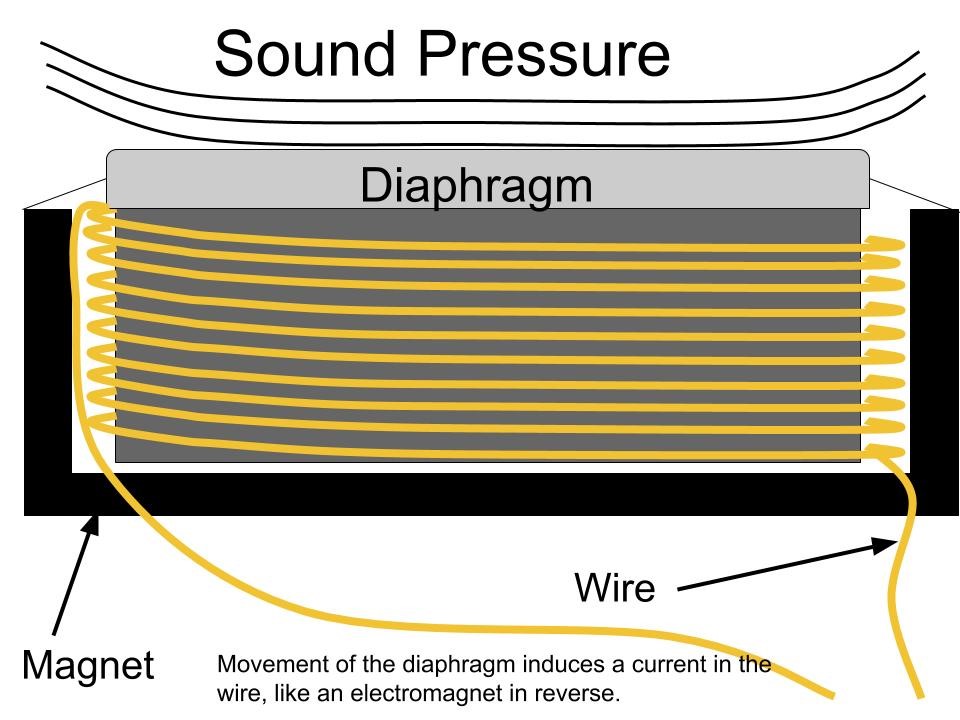 There is another type of microphone that uses a different implementation of the same electromagnetic principle that drives dynamic moving coil mics. In this type of microphone, an extremely thin corrugated metal ribbon is suspended in the “U” of a horseshoe-shaped magnet. Changes in sound pressure cause the ribbon to move back and forth in the magnet, and this movement induces a current in the ribbon. 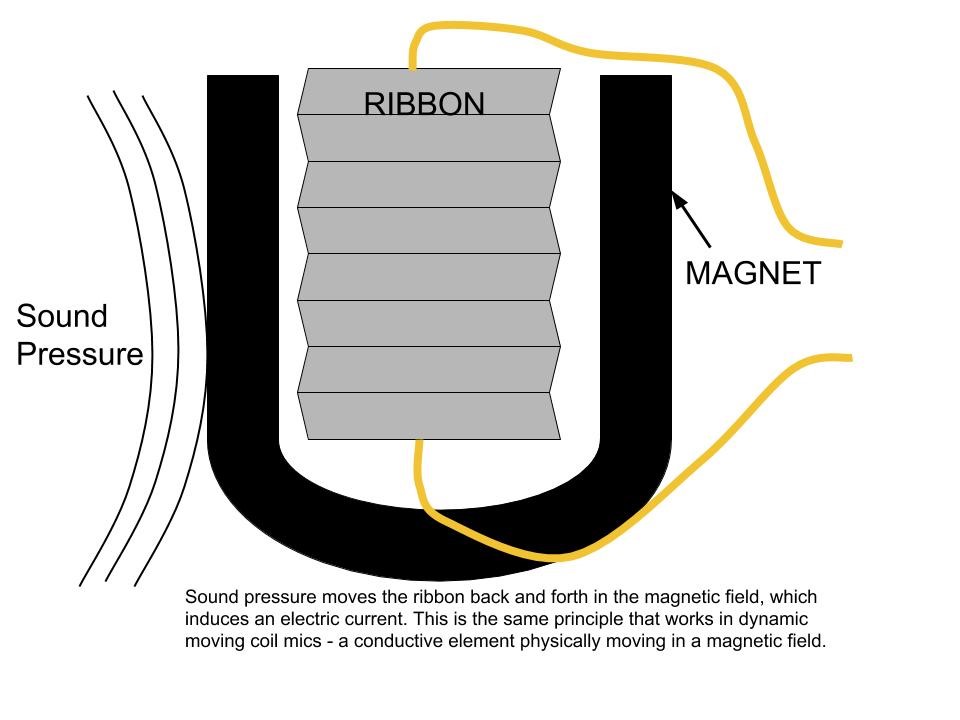 Microphones that generate electricity this way are called ribbon microphones or dynamic ribbon microphones. Making overly broad generalizations, ribbon microphones tend to be associated with a “darker” or “warmer” frequency response that is somewhat lacking in the highest frequencies (although as many engineers will tell you, the highs that are there tend to sound natural and smooth, and ribbon microphones have a reputation for “taking EQ well”, so the treble content can be boosted for a pleasing result) and a neutral transient response somewhere between that of condensers and dynamics. It should also be noted that the vast majority of ribbon microphones exhibit a figure-eight polar pattern, as sound entering from the sides does not move the ribbon back and forth.

While it can be helpful to remember characteristics commonly associated with condenser mics, dynamic mics, and ribbon mics, it is also important to know that those are merely generalizations about these categories of microphone – often the variances amongst microphones of the same type are greater than the supposed differences between the different types of microphones. So if I’m specifically looking for, say, a microphone with extended high-frequency response, off-axis sound that largely matches the on-axis sound, quick transients, and a high output level, I am likely to reach for a small diaphragm condenser – but not every small diaphragm condenser exhibits all of those characteristics or too the same degree as every other small diaphragm condenser. Thinking in terms of categories of microphone can be helpful to point you in the right direction, but you still need to think of each microphone as its own unique entity and listen to the sounds it produces. Experience, along with careful analysis, will lead you to develop your own preferences, habits, and techniques. At Omega, our staff engineers collectively have over 300 years of experience. In the next blog, I’ll lead you through some insights and advice we’ve learned regarding microphone choice and technique.

Want more information? The following link is a great article on the three most common types of microphones:

3 Most Common Types Of Microphones For Recording