As a part of our new blog series, I was asked to pick a piece of gear here at Omega and write up a review. I thought about it a lot, and I decided to write about what is arguably the most important piece of the signal chain (aside from the talent of course): the microphone. Realizing the size of this task, I have broken this blog into three parts. This first two parts are all about microphones – what to listen for, what practical factors to consider, and how they work. The third part is about our excellent mic collection at Omega Studios and some of our Staff Engineers’ go-to choices and tips.

Choosing a microphone is the first opportunity an Engineer has to shape a sound. While that sound can later be influenced by EQ, compression, expansion, time-based effects, or any combination of processes, there’s nothing quite like the experience of hearing the right microphone, for the right instrument or voice, recorded in such a way that it needs no further manipulation to sound just right in the mix. There is no hierarchy of microphones – even the cheapest most busted-up broken mic sounds exactly right for some sources, and even the most pristine expensive finely-manufactured microphone simply doesn’t work very well for some sources. If Engineering was as easy as buying the “best” mic (or the “best” compressor/EQ/console/monitors/acoustic treatment, the “best” anything) I would simply take out a loan, buy that mic, and have a hundred hit records – and so would everyone else.

Microphone selection is actually quite nuanced, but it’s not so complex that it’s unapproachable. Microphones have measurable, audible properties. The ways these properties overlap, and how they are influenced by the real-world acoustic events you’re trying to capture are what determine a mic’s character and its appropriateness for a particular source.

The first property many engineers concern themselves with is a microphone’s frequency response. You can think of this as the microphone’s relative sensitivity to different frequencies. Some microphones are really good at capturing low frequencies, and not so good at capturing the highest frequencies. Some mics are the opposite. Imagine if you knew the exact acoustic sound pressure level of a particular frequency being played in a room, and you measured the electrical output level coming from a microphone in that room. If you compared the electrical output level to the actual acoustic level playing in the room, you’d have a reference for how sensitive the mic is for that specific frequency. Now do that for a wide range of frequencies. If you displayed all of that information on a graph, it would look something like this: 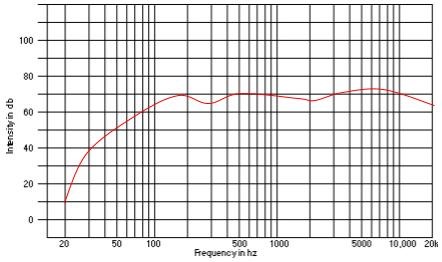 Frequency response graphs such as these tell you the measured results of a process very much like the one described above. They let you know how much the microphone itself will emphasize or de-emphasize particular frequencies in the material you are recording. No microphone has a perfectly flat frequency response, and that makes some microphones more appropriate for some sources or environments.

Frequency response is clearly important information to know when choosing a microphone, but my personal opinion is that people tend to focus a little too much on this one property to the detriment of a few other important properties. Perhaps this is because frequency response is easy to understand and visualize, and we can immediately hear a difference between two mics that have different frequency responses. But really, if this was the most important factor in choosing a microphone, one could just use EQ to make any mic sound like any other mic; experience tells us that it really doesn’t work that way.

As you can see from the graphs, the polar patterns are not brick walls of rejection, but gradual curves with ballooning shapes – hence the “more or less” in the descriptions above.There are a few in-between polar patterns that are also useful, but not as common as the three mentioned above. Sub-cardioid is between omni and cardioid – it’s mostly omnidirectional, but slightly more sensitive on the front than the rear. Supercardioid and hypercardioid are between cardioid and bidirectional – they are better at focusing on the very middle of the front and rejecting sound from the sides and front-sides than cardioid mics are, but as a result they develop little flares of sensitivity in the rear.

It’s important to remember that the polar patterns are intended to show direction of sensitivity – not a perimeter outside of which sound is rejected. A cardioid mic will still capture sound from its rear, but that sound will be significantly quieter than sound coming into the front of the mic. Another important concept when interpreting polar pattern graphs is to remember that a graph displays information on a 2D plane, but microphones capture sound in three dimensions, like this: 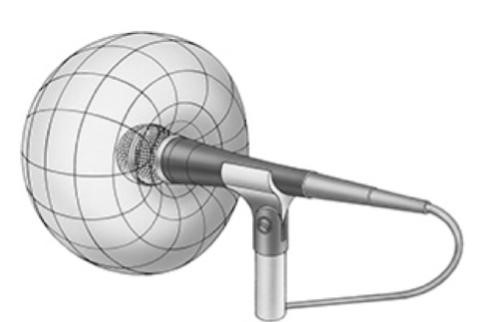 If you combine the two properties discussed already – frequency response and polar pattern, you will begin to notice another important characteristic of microphones – the off-axis frequency response. While the polar pattern guides are helpful, having a solid line that tells you authoritatively where that microphone will pickup and where it will reject is a gross oversimplification. The truth is that most microphones exhibit different polar patterns at different frequencies, generally acting more “omni” for lower frequencies and more sharply directional for higher frequencies. Often for high frequencies the polar pattern can bloom into complex explosion-shaped graphs with numerous lobes of pickup and rejection. 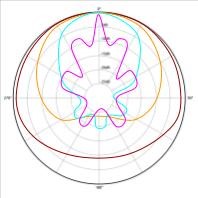 Sometimes that means you want a smooth off-axis frequency response so that the bleed and the direct sound reinforce each other. Sometimes you want an off-axis response with a sharp high-frequency drop off, so that there is little overlap between the off-axis bleed and the direct sound. It’s not so much a matter of which off-axis frequency response is “best” as it is which blends best with all of the other microphones in that specific situation. Sometimes a microphone can sound excellent on a rack tom, for example, but when you combine it with the overhead microphones the sound of the cymbals becomes harsh or odd-sounding. Solo the overheads and they sound fine, solo the rack tom and it sounds fine, the issue is the off-axis cymbal sound bleeding into the rack tom microphone and the comb filtering that occurs when you mix that with the overhead mics. And all of this points toward a key factor when choosing a microphone for a particular element of the recording – it’s not always about making that thing sound as good as it possibly can. Often, the goal is to imagine beforehand how the sound from all of the different microphones will blend together into a cohesive whole. Now factor in an entire ensemble recording, or trying to record a full band in a room that’s really too small, and it becomes a lot to worry about!

It’s also worth noting that you can take advantage of a mic’s off-axis frequency response on purpose; many people will notice when mic’ing a guitar amp, for example, that pointing the microphone directly at the speaker can sometimes unnaturally accentuate high frequencies, making it sound harsh and piercing. If that happens, try turning the microphone to the side a little bit, so that the mic’s off-axis response will roll off some of those high frequencies.

These are some characteristics to listen for when evaluating a microphone. Check out the next blog to learn about some practical considerations you might need to factor in.

In addition, this is a great resource for anyone trying to understand what and how to use a parametric EQ once they’ve picked a microphone and are ready to record and mix:
https://www.therecordingsolution.com/use-parametric-eq-settings-like-boss/

Once you’ve picked a microphone, you can also check out this excellent article to help you choose a beginner audio interface: https://beginnerguitarhq.com/best-audio-interface/