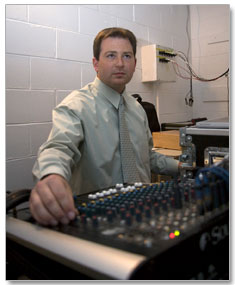 Before Brad Zabelski was an Engineer, he was a Musician. He attended the Berkeley School of Music, where he studied Classical Guitar. At Berkeley, he was exposed to the engineers that would set up his equipment for his performances. This caught Brad’s eye, and he knew that he wanted to pursue Audio Engineering as his career. He found The Omega Studios’ School of Applied Recording Arts and Technologies and quickly enrolled. It was at Omega that Brad was trained to use high-tech equipment and consoles, which he would continue to use for the rest of his career. Brad also earned the ProTools Operator Certification while at Omega. This would be his first step on the journey towards success.

After graduating from Omega, Brad went on to work Live Sound gigs in the thriving Washington D.C. music scene. After awhile, Brad ended up as an intern at the prestigious SoundTrack studio in New York City. There, Brad was able to work with some of the industry’s most professional artists and engineers, which inspired Brad to launch his own business: Traveling Tracks Remote Recording and Mastering, LLC.

Brad moved up to New Jersey to operate his studio, where he continues to work with large ensembles and classical orchestras. Brad also works with the Aspen Musical Festival. Thanks to his musical education he received at Berkeley, as well as his technical education he received at Omega, Brad was able to form a lasting skill base that carried him through his ideal career path.